A Culture of Discovery

Extraordinary Research throughout the University and within the College

Mason’s classification as a Highest Research Activity university is a success for the whole university. We are glad that our programs’ research initiatives contributed to George Mason’s achievement.

At George Mason University, 2006 will always be the “Year of the Final Four,” when Mason’s men’s basketball team surprised the nation with its remarkable success in the NCAA basketball tournament. The 2015-16 academic year may be forever celebrated as the “Year of Research.”

With less fanfare than accompanied its wins in the NCAA tournament, this year has seen Mason triumph in the world of research. First, it was named as an R-1 Doctoral University (Highest Research Activity) by the Carnegie Classification of Institutions in Higher Education. This is the highest research status available, shared by only 115 universities nationwide, and its achievement was a significant goal in Mason’s strategic plan.

The College of Humanities and Social Sciences (CHSS) is proud to have contributed to both of these extraordinary achievements.

The Carnegie Classification, first published in 1973, uses data from U.S. colleges and universities to categorize them by research activity. These rankings are based upon a number of indicators, including research and development (R&D) expenditures, research staff, doctorates awarded in the humanities, social sciences, STEM and other fields, per-capita R&D expenditures, and per-capita research staff. The rankings have been announced every five years since 2000. Mason’s advancement is based upon Carnegie’s 2015 calculation.

And the college’s contribution to Mason’s research mix doesn’t end there. The non-S&E research considered for the Carnegie Classification includes disciplines such as education, law, humanities, visual and performing arts, business and management, communication, journalism, library sciences, and social work. In the period between the 2010 and 2015 rankings, non-S&E research expenditures at George Mason University increased from $4.3 to $13.2 million. This noteworthy increase also contributed to Mason’s Highest Research Activity University status.

Dean Deborah Boehm-Davis says, “Mason’s classification as a Highest Research Activity university is a success for the whole university. We are glad that our programs’ research initiatives contributed to George Mason’s achievement.” 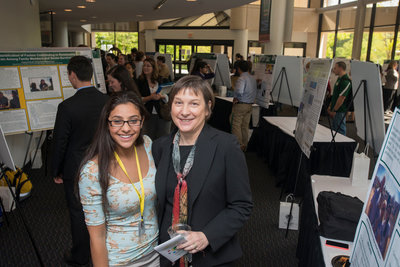 A COMMITMENT TO UNDERGRADUATE RESEARCH

Mason has also been lauded for its commitment to undergraduate research. The Council on Undergraduate Research is a not-for-profit consortium of more than 900 universities that advances undergraduate research opportunities. Mason recognizes and supports this important goal; when the council recognized Mason with its 2015 Achievement in Undergraduate Research Accomplishments Award, President Ángel Cabrera noted: “We encourage our students to pursue research because it is one of the most effective and transformative learning experiences they can have . . . it is the greatest value a research university can offer a student.”

University-wide undergraduate research is coordinated by Mason’s Office of Student Scholarship, Creative Activities, and Research (OSCAR), which houses the Students as Scholars initiative. Bethany Usher, faculty member in the Department of Sociology and Anthropology, is the director of the Students as Scholars initiative, and has been selected to serve as the chair-elect of the undergraduate research directors division for the Council on Undergraduate Research, beginning in June 2016.

She welcomes the recognition of Mason’s efforts: “We are considered a leader for doing this, which is kind of exciting because we weren’t doing this at all five years ago.” She appreciates “that we took a program and actually had the university resources to be able to say it’s a priority and we’re going to do it the best way we can.”

In September 2015, Usher and Stephanie Hazel, acting director of Mason’s Office of Institutional Assessment, addressed a National Academies of Science, Engineering, and Medicine committee dedicated to strengthening research experiences for undergraduates. They presented a study of participants in the Students as Scholars initiative to assist the committee in its goal of making recommendations on the assessment of undergraduate research nationwide.

“What they are trying to get a handle on with this group,” says Usher, “is what are the outcomes we expect for undergraduate research?”

Mason’s Students as Scholars initiative uses a rubric to measure a variety of outcomes based upon each level of research intensity.

The university tracks students throughout their Mason academic careers and gains a picture of their learning experiences. The data confirm that students working one-on-one and in research-intense environments rate the value of their research very highly in terms of their goals, plans, and attitudes about research, and their experience at Mason.

Usher notes that these results are true for all students involved in research. “And that’s important because there is some idea that the process of science is somehow special when, in fact, we see it’s actually the process of research— asking questions in a systematic way, whether or not it’s specifically termed in hypothesis testing and scientific method, or whether its more empirical, like working in a humanities field. We don’t see any difference in how students perceive that. I really love the idea that the value for the students comes out no matter what the method of the research is.”

The undergraduate research experience at Mason is a selling point for the university, says Usher. “It’s now one of the points that admissions uses or stresses in their work,” she says. “They always walk people by [the OSCAR office] and talk about undergraduate research. And a lot of the students they pick as ambassadors are ones who have done research so they can talk about it.” 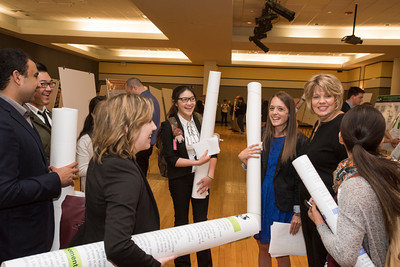 RESEARCH IN THE COLLEGE

CHSS celebrates its students’ research each spring with its Undergraduate Research Symposium. The college was the first to hold such an event, says Usher.

“Since I teach in anthropology, I always have a couple students each year who participate,” she says. “So I just get to walk around, talk to students, and be proud of them. It’s really fun.”

The symposium has steadily grown since its start in 2009. In 2015, students presented nearly 100 oral or poster presentations; their research findings mirrored the diversity of the college’s academic departments. For example, the 2015 presentation topics included: • The Black Student Community, the National Pan-Hellenic Council, and the Role that Knowledge of Family History Plays, Anthropology • Civil Society and Democratic Consolidation: Cases from Egypt, Yemen, and Tunisia, Global Affairs • Cocaine & Crime: How the Retail Price of Cocaine Affects Criminal Activity, Economics • How Facebook Feedback Relates to Social Connectedness, Communication • Interruptions Can Alter the Perceived Relationship between Certainty and Accuracy, Psychology • Paradise Revisited: Conceptions of the Divine in Dante and Morrison, English

Many of the presenters at the college’s symposium also participate in the university’s Celebration of Student Scholarship.

The college looks forward to continuing the growth of its research efforts, both among its faculty and its students, and to continuing to contribute to the university’s culture of discovery.

“If our goal is not only to do authentic research at the university, but to also involve undergraduates so they learn better, then everybody wins,” says Usher.

This article originally appeared in the 2016 edition of Cornerstone.