Raquel Friedmann, Senior of the Year

Raquel Friedmann, 2015 Senior of the Year, credits her parents with teaching her that every action has an impact. Part of that credo included being good environmental stewards in their home in southern California. Composting, recycling, and gardening were part of the family’s routine.

“My parents were good about encouraging us to get outside and explore,” she said. “From a young age, I had a real love for the natural environment.”

Friedmann has carried that legacy forward through environmental education and advocacy. She hopes to instill that same concern for the environment in lawmakers, community members, and her peers.

“Raquel epitomizes the Mason graduate,” said Gring-Pemble. “She has demonstrated a level of resourcefulness, an enterprising spirit, and a commitment to making meaningful changes in society in ways that are truly astounding for any adult, much less a college student.”

Friedmann initially wanted to study marine biology and conservation, but a high school science teacher showed her that environmental studies could offer a solid foundation for many career paths. This eventually led her to Mason’s Environmental and Sustainability Studies program, where she met many students equally passionate about the environment.

“My success at Mason had a lot to do with finding a supporting community,” Friedmann said.

That community quickly expanded to include key roles on campus in Student Government, as a residence hall advisor, and an Orientation Leader, among others.

“One thing I love about Mason is that they want you to have a role in making change on campus,” she said. 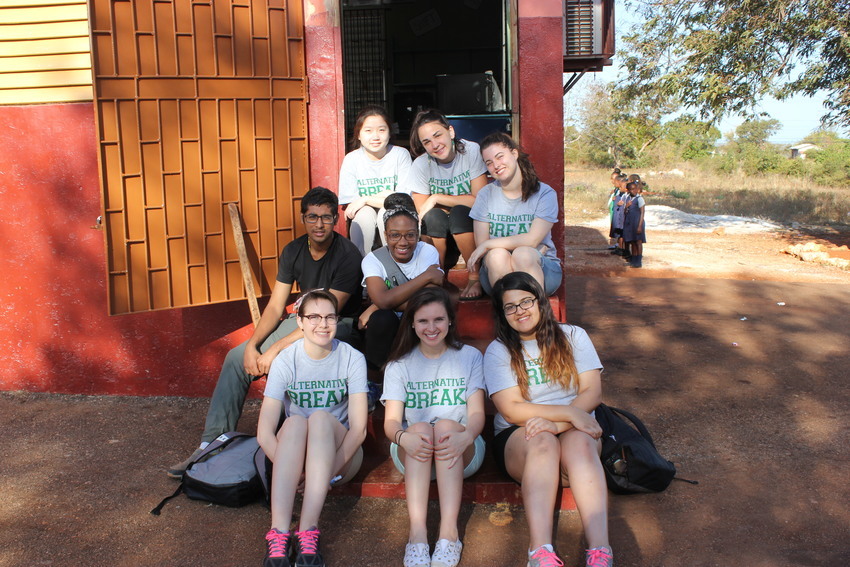 Raquel Friedmann, bottom left, is pictured with the group who
went to Jamaica as part of Alternative Break. Raquel was the trip
leader.
Photo courtesy of Jana Fryman, OHRL.

As a sophomore, Friedmann realized that, with careful planning, she could complete her degree in three years—years filled with strenuous course work, internships, volunteering, and international Alternative Break experiences.

She also accumulated numerous honors and awards. Friedmann received the ConocoPhilips Water and Biodiversity Stewardship scholarship, the Peter and Marjorie Storm Sustainability Endowed Scholarship, and the Peter C. Forame Student Leader Scholarship. She was inducted into the Alumni Association’s Golden Quill Society, was named Student Government Executive Branch Member of the Year for the 2013-14 year, and earned the College of Humanities and Social Sciences Dean’s Academic Achievement Award in 2013, among other honors.

Friedmann has spent her final semester at the Smithsonian-Mason School of Conservation studying the intersection of conservation, biodiversity, and society in Front Royal, Virginia.

“I love the program,” she said. “We have lectures, but we spend a lot of time out in the field learning hands-on conservation biology.”

Friedmann plans to continue her studies at the Middlebury Institute of International Studies at Monterey, working toward a graduate degree in international environmental policy. She hopes to join the Master’s International program that combines graduate work with a full Peace Corps volunteer experience.

“I feel very prepared,” she said. “Mason has challenged me academically. There are so many outstanding people on campus, I couldn’t have imagined a better experience.”